Subscribe for updates
Back to The Moor Lane Community Garden

Poetry commission: a portrait of you in a garden, now

On World Poetry Day Sunday 21 March, a new poetry commission will be launched within the Moor Lane Community Garden, to create additional site-specific content and additional enjoyment for passers-by. 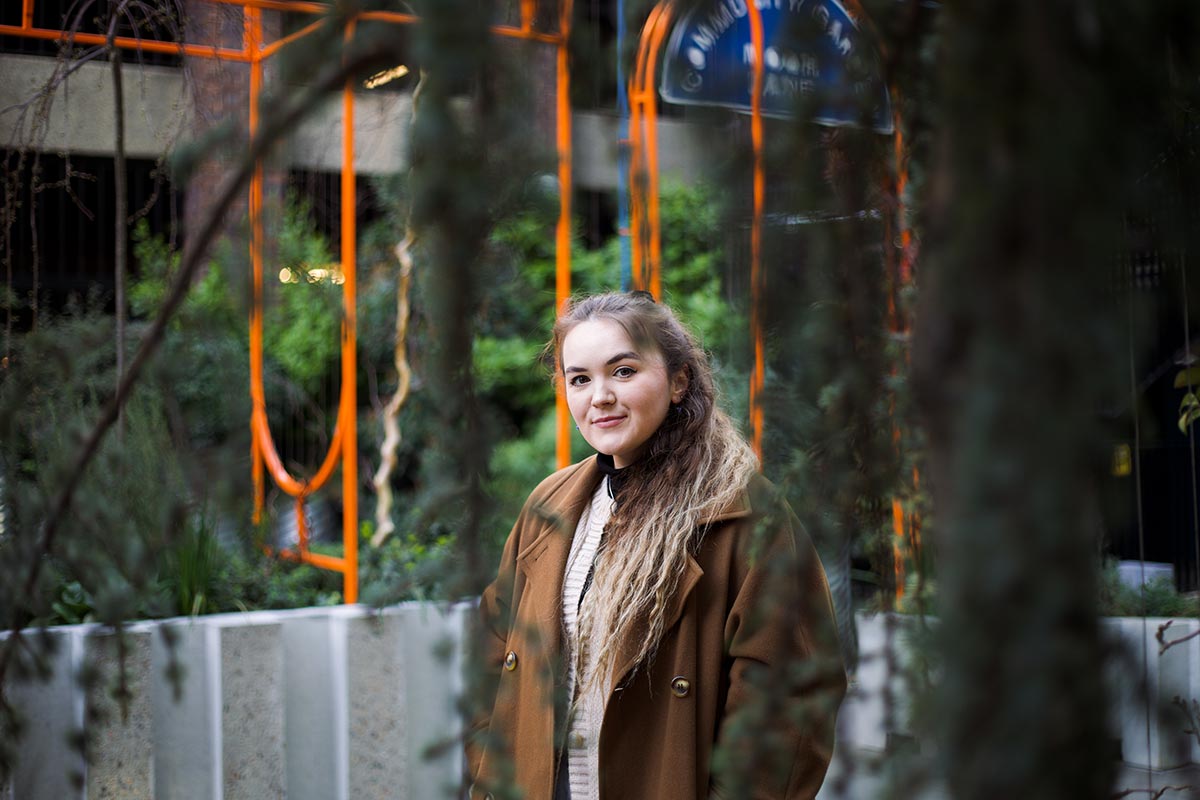 The poem, a portrait of you in a garden, now, written by poet Kit Finnie, appears across eight panels, as part of the urban garden’s structure.

The poem was be developed by the poet Kit Finnie in collaboration with the Guildhall School and Music & Drama. In addition, Kit Finnie facilitated eight poetry and writing workshops for multiple community groups and organisation in the local area. 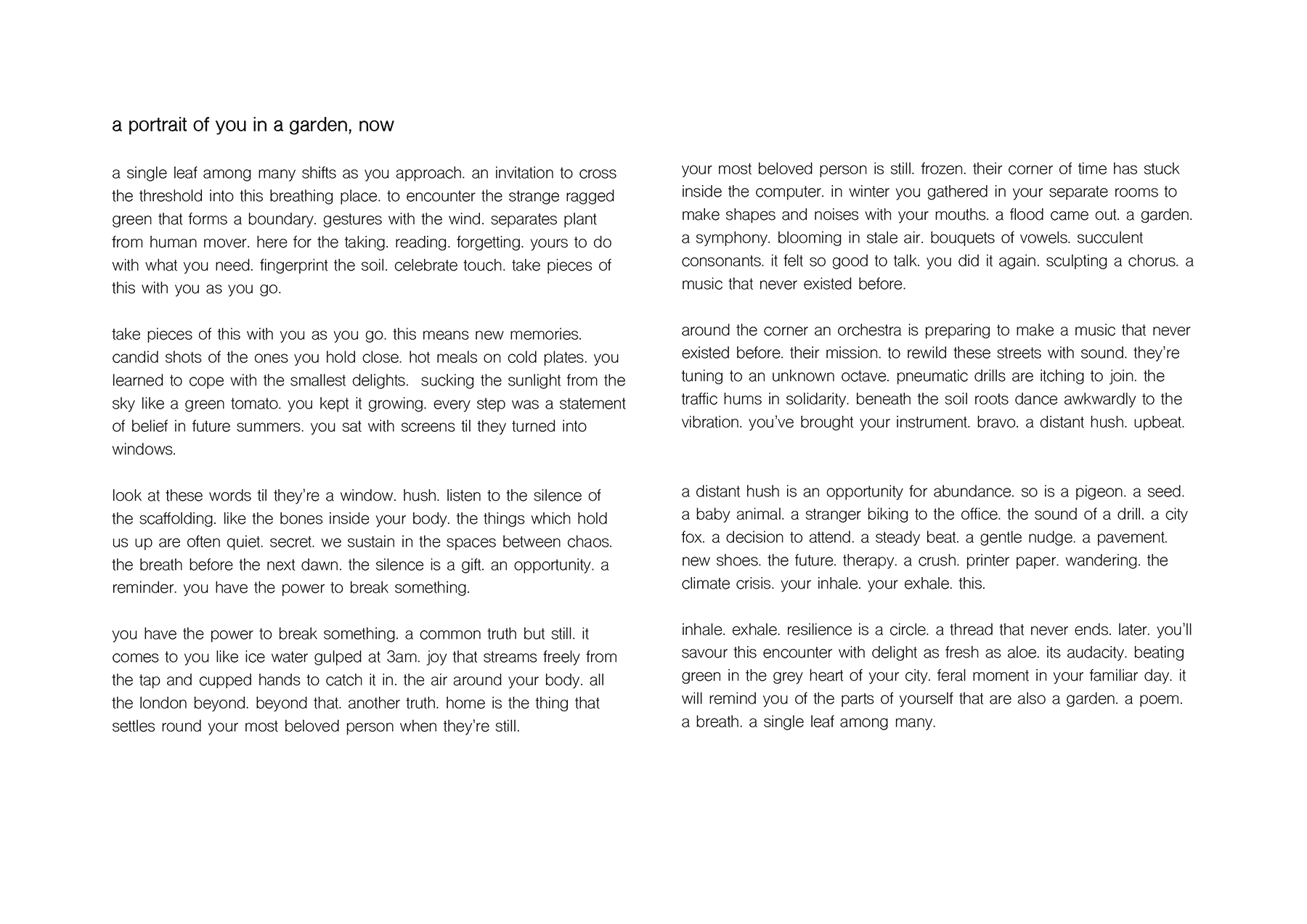 Culture Mile · a portrait of you in a garden, now

Together with Guildhall School students, Kit Finnie also worked with local residents and community groups in the local area, including Age UK, Claremont Project, Women for Women Refugees, Core Arts and the Peel Institute. They explored themes of sound and silence; community and coping; home and boundaries and surprise and delight to generate ideas for her final poem, alongside poetry written by the workshop participants themselves

Feel the art in the heart of the City

A misalignment of lips, prelude
to half a conversation.

Leaves Eddy Over the Earth's Scars

Leaves Eddy Over the Earth's Scars

As they fall, the leaves gather
as puddles of colour on the sidewalk,
forming eddies against the breezeblocks.
Caught in the current I am washed along,
tumbled, my limbs dragging against the earth,
blood springing from bone-deep gashes.
In time I will heal. I know this.
But the scars will remain,
reminding me of this moment,
this river, this torrent,
reminding me I might have drowned,
reminding me: inhale, exhale, breathe.

On a journey like this you will need
a drawstring bag, no bigger than your fist,
filled with shells and seaglass.
You will be about as far from the ocean
as it is possible to be, so every whorl of shell,
every glister of glass is going to be vital.
Put it in your right pocket
along with the fold-out map which marks
the underground stations, the forests,
the mushroom stores, the charcuteries,
the churches and museums and temples.
You will also need a twist of herbs –
rosemary, feverfew, tansy –
and an envelope of coarse ground salt.
Put those in your left pocket.
Pull on your boots, the scarlet ones
with the rainbow laces. No zips or buttons,
for these are the stuff of nightmares.
One last thing: take your grandmother’s shawl,
the one with the embroidered peonies
that smells of Earl Grey tea one day
and lavender and roses the next.
Now you are ready. Head for the bus stop.
You will need the 222 service, the one driven
by the old man in the Rasta hat.
He will show you the way.

The jungle parts before me,
offering a glimpse of the surrounding city.

Roots hang from the branches above,
swinging like the tails of gibbons.

I haul myself from the dirt path up,
up into the leafy canopy.

The contrast is absolute: branch and stem
reflected in glass temples of commerce.

The road between is a scar,
its ragged edges raw and bleeding.

As I step forward chasms open up
beneath my feet, filling with seawater.

I wrap my hands around the cup,
inhale the smell of coffee beans mingled
with mock-orange, roses, lavender.

I rub my back; it aches. But there is satisfaction
in the freshly planted borders.

The cyclamen and Solomon’s seal
transplanted from my father’s garden
spread beneath the silver birch.
A hosta snails have yet to find
and hellebores flourish in the dappled shade.
In fuller sun, carnations burn the soil
to ash - scarlet, purple, white.

I drain my cup, toss the dregs
across the new-mown grass
where fearless robins search for grubs.


It’s time to shake the pot-grown bulbs
from root-bound soil, to plant them out
along the path in hope of Spring.

The City of London Corporation, together with the Barbican, Guildhall School of Music & Drama, London Symphony Orchestra and the Museum of London, are bringing the area to life with imaginative collaborations and exciting events.