The Hidden City by Emile Holba is a photography commission that aims to change perceptions of the City and showcase the everyday creativity that takes place behind the scenes, across the City. We chatted to Emile about the commission, how he became a photographer and future projects. 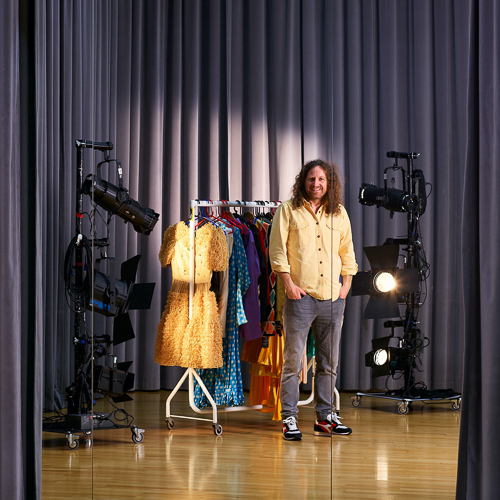 How did you become a photographer?

My parents encouraged an artistic outlook on life and for my 11th birthday I received Fuji SLR and a roll of slide film, and I was hooked. From then on I would explore my teens through a viewfinder and even documented family holidays like I was assigned by National Geographic - yep, even with a projected slide show upon return! Through my 20’s I continued with university and ‘9 to 5’ jobs but photography was where my heart was, so as I turned 30 I decided to change and start to make a living out of photography. I was initially rather nervous that the pressure from the ‘business’ side of photography would dampen my enthusiasm - after all one has to pay bills - but it went well. I ran with a few lucky breaks and here I am 15 years on and loving the creativity.

Visually speaking, the great photographers of the 20th century, who really shaped the medium - Avedon, Weegee, Sander, Newton, Crewdson, Sternfeld, Lange, Bourdin, Wall and Freed, to name a few. They all took their part in developing truly innovative composition, lighting techniques and building the ‘art of photography’ as response to a client’s commercial brief - true pioneers. In our age of digital communication and powerful creative tools that allow for unlimited expression, my influences are more narrative driven, with sound inclusivity, noteworthy comment and observation.

What were your initial thoughts when you received the brief for The Hidden City?

First off, I was delighted to be recommended by Suzie Curtis to apply for the brief. After an email, phone call and subsequent in-person meeting with Sian Bird, I realised that there was more substantial body of work to investigate. During that meeting, and learning more about Culture Mile’s remit and mid-term goals, I shot from the hip and suggested that Culture Mile dig deeper into their member organisations’ histories and try to develop a more formal visual narrative. With Sian’s support, I carried out extensive research into around 40 organisations and found 3 common themes throughout - people, place and object. With a nod to the City of London’s 2000 year history and its deep roots in the arts, I proposed a classic triptych format. Sian and the team went for the idea and I’m deeply grateful for their trust in me.

Why did you choose to do triptychs?

The triptych format was key to focusing and distilling down the many variables connected to a brief of this expanse. So many organisations offering very different ideas and services, from globally leading legal companies to small scale, yet intimate art collectives. With all of Culture Mile’s senior partners on board too - Barbican, LSO, Museum of London and Guildhall School of Music Drama - I needed a common thread that would tie all organisations together. Keeping the triptych layout meant each organisation had to really think about what object best represented their offering, the most appropriate person(s) that channeled the spirit of the organisation, and finally the place that offered a glimpse into an organisation’s world - building a sense of discovery. Furthermore, with all organisations being represented in the same focused format, a subtle but powerful democratic boundary was met, as I wanted the brief to be as inclusive as possible.

What aspect of this project did you find most inspiring?

The sense of discovery and the people I met. I felt very privileged to not only access some extraordinary spaces within the City, but spaces that have such an illustrious history of global importance. Photograph some wonderful objects diversified my photographic methods, which stoked my love of a practical challenge - even going to lengths of researching an off white (non fashionable pink) salt that wouldn’t reflect studio light too much on the carpet of The Salters Company’s carpeted floor. Thank you to the internet for supplying a lovely muddy grey French sea salt! And, of course, making formal portraits of the people that make Culture Mile’s outreach tick. I love shooting portraits, especially environmental ones, and The Hidden City provided that pleasure hugely.

There are a lot of people and places in The Hidden City, how did you find fitting all of that into a few months?

In short, like herding cats. I joke of course, as everyone was so understanding and co-operative. That said, even with goodwill in abundance, scheduling 55 people across 18 organisations was no easy task. Flexibility, understanding and pragmatism prevailed. Preparation was key, so initial explanatory emails, personable phone calls and meetings ahead of any planned shoot worked wonders. I wanted each and every person to feel part of the project and empowered to personally invest their valuable time with me. They were all amazing, with so many stories too...


Apart from The Hidden City, what has been the biggest highlight in your career so far?

Oh, that’s tough. Probably making and presenting a five-part radio series for BBC Radio 4 called Welcome to the Quiet Zone. Born out of an idea I had to investigate a community that work and live under the gaze of one of the world’s most sensitive radio telescopes in the heart of Appalachia in West Virginia, USA. I proposed my idea to the BBC and they commissioned the series, The result being a marvellous marriage of a compelling and intimate photo essay, widely published article and, of course, being broadcast live on primetime Radio 4! The series is still available on BBC Sounds.
‍

You used The Hidden City to create some online photography lessons for young people. What was that process like?

Just brilliant. I loved every second producing a webinar series for A level and BTEC students. A timely response to national lockdown, myself and art teacher Ella James of Highbury Grove School created an interactive six-part video tutorial based on The Hidden City, whereby each student was tasked with creating their own triptych at home. By using and adapting the The Hidden City brief as a guiding pedagogical framework, we were able to teach the practical methods required to create a noteworthy photographic triptych. And wow, the students responded brilliantly, with fantastic engagement (through a difficult time) and produced some exemplary work - so much so, the Islington Gazette made a special features report. Having the opportunity to expand The Hidden City’s ecosystem to provide a lasting legacy is simply fantastic too.

What are you working on at the moment / next?

Aside from commercial work, I am continuing to work on a large scale project I’ve been shooting on the Arizona / Mexican border for the last two years. Alphabet Soup is the working title of my project that chronicles law enforcement’s mobilisation to impede criminal activity in the borderland of Pima County in Southwest Arizona. Extraordinarily complex, with many moving parts and vested interests - the ongoing situation in the arid and searing heat of that specific hinterland, mirrors many of modern USA’s societal challenges. My narrative focus is shaped by my reaction as a non-American citizen to what I have witnessed, not bound by polemic judgement or favour.

Take a look at Teaching The Hidden City

Visit Emile Holba's website to see more of his work