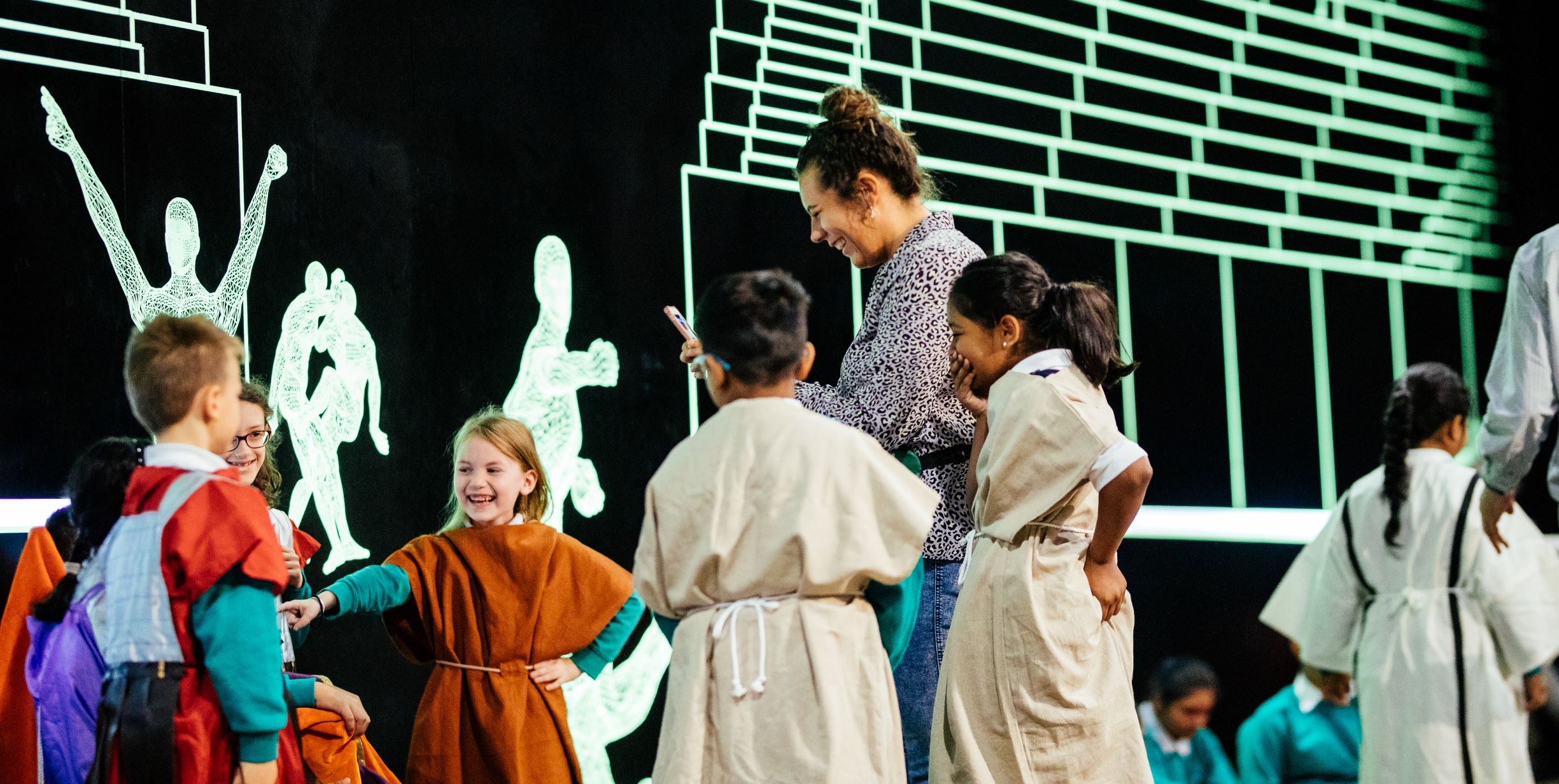 Suitable for primary and secondary pupils, our dual site visits offer schools the opportunity to explore the City of London's cultural, historical, and artistic offerings with interactive workshops and guided tours to bring learning to life.

This visit combines an interactive session with a trained archaeologist in London's Roman Amphitheatre, with a guided walk between the two venues, looking for evidence of the ancient city , and the enduring influence of the Romans , and ending with a self-directed exploration of the Museum's Roman galleries.

Pupils will learn about Roman  Londinium, the Amphitheatre's discovery and history, and have the chance to handle some almost 2,000 year old Roman artefacts.

This session is recommended for key stage 2 and supports the development of key fusion skills including communication, critical thinking, and problem solving.

Booking is free, with the option to include an interactive drama experience - pupils’ imaginations will be awoken when they meet a Roman soldier and find out about his life in the army and what it was like to live in Londinium. This is at a charge of £80.00 per class, please enquire when you make your booking.

To book and view upcoming availability see the Museum of London's website.

Travel back to 1666 and learn about the architecture and life of  London before the Great Fire, with a facilitated workshop combining history, art, and drama, before climbing the 311 steps to the top of The Monument for a view across the historic City of London.

This visit combines an interactive facilitated session in the Guildhall Art Gallery, using maps, costumes, and the art in the galleries to inspire students to imagine seventeenth century London, and the circumstances and impact of the Great Fire. This is followed by a guided walk to The Monument with weather-dependant outdoor activities, followed by a climb up The Monument.

Pupils will learn about London life 350 years ago, and have the opportunity to meet Samuel Pepys, read Robert Hooke's diary, design their own Monument, dress up as a Fire Warden, and see a 360 degree view of London from 60 metres above the City.

This session is recommended for key stages 1 and 2 and supports the development of key fusion skills including communication, creativity, and analysis and evaluation.

Discover what life in Londinium was like almost 2,000 years ago with a visit exploring the mysterious Temple of Mithras and the remains of a Roman bathhouse. Suitable for key stage 2 pupils, workshops at both sites have been designed to support the National Curriculum.

At the London Mithraeum Bloomberg SPACE, pupils will handle and investigate real Roman objects to reveal the stories of the first Londoners and will then explore Roman religion and learn about the Temple of Mithras before being taken down, seven metres below ground level, to experience the reconstructed temple and an immersive sound and light experience.

A guided walk between the two venues will help you spot the hidden evidence of Roman London along the way to Billingsgate Roman House and Baths, where they will explore the Roman ruins, get a chance to handle, analyse and evaluate real and replica archaeological artefacts associated with the site, and understand what life was like for people living in Roman London.

Pupils will also use observation, critical thinking, problem solving, and teamwork skills to try to build some Roman architectural features from the site, and to play the Roman game, Terni Lapilli.

Explore both the public and private side of Roman life at London’s Roman Amphitheatre and Billingsgate Roman House and Baths on this dual-site visit, which includes a guided walk between venues.

Beginning at London’s Roman Amphitheatre, under Guildhall Art Gallery, with an introduction to Roman London and the discovery of the amphitheatre, pupils will handle, analyse and evaluate some real archaeological artefacts to find out what they can tell us about life in the capital almost 2000 years ago. Pupils will then have the opportunity to flex their creative talents and become Roman Londoners as they try on costume and recreate a visit to the games.

‍
A guided walk between the two venues will help pupils spot the hidden evidence of Roman London, to Billingsgate Roman House and Baths, where they will explore the Roman ruins, get a chance to handle, analyse and evaluate real and replica archaeological artefacts.

This session is ideal for Key Stage 2 pupils, who will also use observation, critical thinking, problem solving, and teamwork skills to try to build some Roman architectural features from the site and to play the Roman game, Terni Lapilli.

Enter your details below to register your interest and to recieve more information by email.